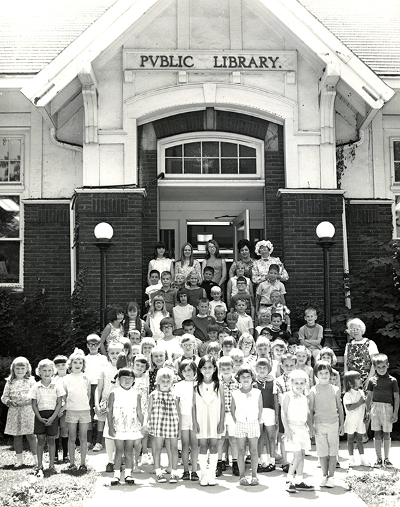 The Pendleton Community Public Library, formerly known as the Pendleton and Fall Creek Township Library, opened to the public for the first time on March 1, 1912. The idea of a public library in Pendleton was first conceived in 1909 by Sarah Skillen Cook who believed that the town could support a Carnegie Library. However, before Pendleton was eligible for a Carnegie Library, it needed to operate a circulating library of some kind. Mrs. Cook brought the idea before the Independent Social Club who slowly came around to agreeing to launch a library. The Social Club gathered a small collection of 18 books and began circulating them among members of the Club.

Soon after the circulating library was launched, Mrs. Ida Parson became passionate about the idea of opening a public library and joined Mrs. Cook in this endeavor. The library’s collection grew beyond what could be housed by members of the Social Club and took up its first official location at Mr. Tanke’s drug store where they were cared for by Mr. Tanke and his daughter Miss Edna. As more and more Pendletonians became interested in the circulating library, the time was right to contact Andrew Carnegie and request funds for a library building. Mr. Carnegie agreed to give $8,000 towards Pendleton’s first library building, once certain conditions were met.

A mass meeting was held in the M. E. Church where a large number of citizens was present. During this meeting, a committee was appointed to lead the charge. It was then that Mr. Thomas M. Hardy Sr. rose from his seat and informed everybody that he would give a lot west of his home on which to build the library. Once a library tax was levied in Pendleton, and 100 signatures were obtained to levy Fall Creek as part of the library district, all of Mr. Carnegie’s conditions were met. The $8,000 check arrived and the Carnegie Library located at 424 East State Street was built.

The first librarian was Margaret A. Wade who served from the opening of the library until 1918. At that time, Miss Evangeline E. Lewis was elected as librarian. Miss Lewis retired in 1938, when Mrs. Eda Tanke Swain became Librarian.

Perhaps some of the fondest memories of the library in Pendleton are connected to the tenure of Mary Ahrens, who was the Librarian from 1953 to 1972. Mary loved the library and promoted information sharing as well as a love for reading, especially among children. Her Bookworms program was started in 1954, and the first storytime was held in 1955. Both programs are still going strong today.

The current library building was built in 1991, with an addition and renovation project completed in 2007. The updated library is warm and welcoming, with walls of windows providing natural light throughout the facility. There are many areas to sit and read, work on a computer, collaborate, or do research. The friendly staff is always willing to help patrons with whatever they may need. And, programs for all ages are offered on a regular basis. The mission of the Pendleton Community Public Library is “to provide traditional library services, creative initiatives and up-to-date technology in a comfortable facility with friendly, helpful staff.”